Yoga off the Mat

Yoga on the mat is fabulous for our health and well-being. However, it is actually only a small part of the total yoga practice. Historically, it was expected that a novice yogi would already be proficient in what could also be described as, “Being a decent human being” before beginning the physical aspects of yoga.

We don’t teach yoga to baboons!”

Academic Alan Watts once famously said, “We don’t teach yoga to baboons!” A comment that might seem rude to both to the humans he was referencing and to baboons! (Especially when, these days, a quick search online will produce multiple cat, dog, horse and goat yoga videos. Who’s to say there’s not a baboon or two out there practising, too!)
However, his comment stemmed from the fact that traditionally certain qualities were required of someone who wanted to be initiated as a student of yoga. The first layer of these being known as The Yamas.

According to ancient sankskrit texts in which the Yamas are found – The Yoga Sutras – an aspiring yogi ‘should‘ be already be practicing:-

These five qualities together are known as the Yamas and are the first step on an 8-limbed path to Yogic Bliss.

The Eight Limbs of Yoga
(in order) are:-

Now Yoga is for Everyone

Luckily, these days, no-one is precluded from entering into and reaping the rewards of yoga. These philosophies are often woven into classes without you even realising and all can be practiced “on the mat”. But it’s when we take them “off the mat” and into the world – into our daily lives, our work, our play and our relationships – that we start to really see the magic happen!

To learn more about these Yogic Philosophies:

My personal favourite is this translation by Sri Swami Satchidananda
[Cool bit of trivia: he was the opening speaker the 1969 Woodstock Festival!].

Find out more about Nette here.

Originally written for and published on the Things 2 Do Marbella website September 2016.

Jeannette Amy (Nette) Hopkinson (BSc Hons Sports & Life Sciences) is a certified yoga teacher and Oneness Blessing Giver based in Andalucia. Follow her on IG @nettenirmalayoga or find her on facebook @NirmalaYogaSpain 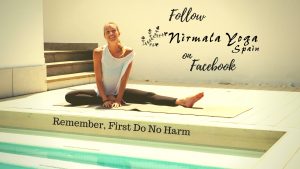